To share your memory on the wall of William Smith, sign in using one of the following options:

"Despite the demands of his career and health difficulties during his later years, my dad remained upbeat, good-humored, and a genteel Southern gentleman throughout his long life,” said youngest son Martin J. Smith, a writer who chronicled his father’s journey from mill worker to executive in the 2009 book “My Father’s Tuxedo: The Story of a Suit.” “He and my mom were married nearly 79 years, and I think everyone who met them was inspired by their devotion to one another.”

The Alabama native was raised by a serial entrepreneur father who once was passed over for promotion at U.S. Steel because he lacked a college degree. That’s why Smith’s father insisted that William, his oldest son, attend Alabama Polytechnic Institute, now known as Auburn University. Smith graduated with a bachelor’s degree in business administration in 1939.

He met Helen Vance in Panama City, Fla., and they shared their first beach sunset together on Sept. 1, 1939—the day Adolf Hitler invaded Poland. He married Helen on Sept. 20, 1942, but history intervened. The former ROTC officer was called to serve in World War II, and after training stints in Texas and Oklahoma, was sent to Europe as a U.S. Army captain commanding a unit that laid communication lines just behind advancing troops. In March 1945, his unit played a key role in the Allied capture of the Remagan Bridge over the Rhine River, which is credited with helping shorten World War II.

Smith began his career at U.S. Steel and was selected for the company’s management training program shortly after he started. He accepted a transfer from Birmingham to the company’s new Pittsburgh headquarters in the early 1960s, and the couple built a home in Trotwood Acres, a then-new subdivision of Upper St. Clair.

By then the Smiths had four children, and William’s career was taking him all over the the world as he developed new markets for steel. He helped design livestock barns in the South and West and worked with NASA to help construct historic Apollo program launch pad 39A at the Kennedy Space Center. In his role as chairman of the American Iron and Steel Institute’s Market Development Subcommittee, Smith said he signed the agreement that gave the Pittsburgh Steelers the right to use the now-familiar “Steelmark” logo on their helmets. At one point, Smith even convinced U.S. Steel to design a steel-top billiard table, which eventually warped and ended up as an unplayable curiosity in Smith’s basement.

After he retired in 1982, the couple enjoyed playing golf at St. Clair Country Club, where they were long-time members. They were active members of St. John Capistran Church for many years, and Smith continued to advise steel companies in developing countries through his volunteer work with SCORE, the nation’s largest network of expert business mentors dedicated to helping small businesses get off the ground.

When he began losing his eyesight about two decades ago, Smith and his wife moved into the Friendship Village South Hills retirement community in Upper St. Clair. They became familiar figures as the long-married couple who traversed the hallways hand in hand and, later, held hands constantly as they sat or slept side-by-side in their shared room in the community’s health center. He taught himself to shave and perform other daily living skills without eyesight, and to recognize nurses and visitors by voice. Even after Smith fell and broke his hip two weeks before his 100th birthday, he worked hard to recover so he could continue caring for his wife, who is now 98.

“He often told his doctor, ‘Your only job is to keep me alive one day longer than her,’” son Martin said. “Their bond was extraordinary.”

To send flowers to the family or plant a tree in memory of William L. "Bill" Smith, please visit our Heartfelt Sympathies Store.

Receive notifications about information and event scheduling for William

We encourage you to share your most beloved memories of William here, so that the family and other loved ones can always see it. You can upload cherished photographs, or share your favorite stories, and can even comment on those shared by others. 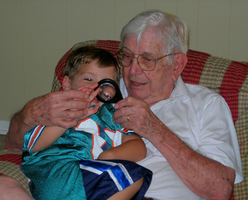