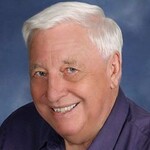 He was a loving and devoted husband of Nancy and is survived by daughter Carin Silvester and son-in-law Peter Silvester; and daughter Gayle Haresign; and special friends of the family, Hai Nguyen, Kristyn Kiddy, Timothy Swets, and Willie Thompson. Gordon was loved by his family and friends living across the globe.
He is preceded in death by parents, Roland and Catherine Haresign, British Missionaries.

Gordon and his twin sister Patricia were born on a mission station on the shores of Lake Mweru, Belgian Congo. He did his schooling in Rhodesia/Zimbabwe and studied accounting at the University of South Africa. He had a professional career with a major international accounting firm and retired as an army captain at age 29.

In 1973 the family moved to the USA where Gordon was involved in Christian ministry through Emmaus Bible College, Oak Park, IL While at Emmaus he held several positions including, Director of Business and Director of the global Emmaus Correspondence School. He also taught Bible and missions classes at Emmaus. During these years, he was an elder at River Forest Bible Chapel and worked with the youth in the Chicagoland area.

Gordon was involved in the Steve Linscott case. His book, INNOCENCE, documenting the case was published by Zondervan in 1986.

In 1984, the family moved to Pittsburgh PA where he was involved in church planting and pastored at several churches. In 1998 he started his own company as an independent sales consultant, and used this time to minister and witness to many that he encountered. He remained deeply involved in preaching and teaching. In February 2019 Gordon resigned from his sales position so that he could devote more time to his wife and her care while he continued to work on his writing.

In 2003 Gordon joined the board of Scripture Union USA and was active until he retired from the board in October 2020 as Chair when he was appointed an emeritus member of the board.

Over his lifetime, Gordon travelled to six continents and sixty countries, he lived on three continents and in six countries. There were many great men and women of God that impacted his life and helped him become the spiritual leader and example that he was to so many.

In Gordon’s final biographical sketch he completed on February 5th, 2021, he wrote, “February 24 will be our 59th wedding anniversary. I have been privileged and greatly blessed to have lived with a beautiful, talented, and godly woman. And now I am in the overtime period of my life and determined to max out for God during the years God has assigned me.”