To share your memory on the wall of Victor Maitland, sign in using one of the following options:

Provide comfort for the family of Victor Maitland with a meaningful gesture of sympathy.

From humble beginnings to a life of “Wows”! It is with great sadness that we announce the passing of our dear father, Victor (Vic) I. Maitland, age 98 on November 29, 2019.

He is preceded in death... Read More
Victor I. Maitland

From humble beginnings to a life of “Wows”! It is with great sadness that we announce the passing of our dear father, Victor (Vic) I. Maitland, age 98 on November 29, 2019.

He is preceded in death by his parents, Maria and John I. Maitland, his loving wife of 66 years, Katherine Maitland and his grandson, David Maitland.

Vic leaves behind a legacy of accomplishments he humbly calls his “WOWS”. Born in Odessa, Russia on March 10, 1921, he emigrated to America at the age of 2. He grew up in Detroit, New York City ("toity toid and toid” he would laughingly say), and Pittsburgh, PA.

He moved his beloved wife and family to Fort Lauderdale, Florida in 1966 and resided there until 2014 when he relocated to Jupiter, Florida.

Football played an important part in Vic’s life. He played college football at Hobart College in Geneva, NY. A unanimous UPI Little All-American selection at tackle, he was fifth-round draft choice for the New York Giants in 1943. After serving in World War II, he returned and found that he had been traded to the Pittsburgh Steelers (1945). A prominent Steeler fan offered him a job in his chosen profession of marketing, at something better than the pay for professional football players in the midforties and he retired from the game.

Over 32 years he developed Vic Maitland & Associates, Inc., a full-service advertising agency with branch offices in Pittsburgh, New York, Chicago, and Fort Lauderdale. He served such giant corporations as Westinghouse Electric Corp, US Steel Corp, The Great Atlantic and Pacific Tea Company (A & P), Columbia Gas Systems and over a hundred others. Through all that time he maintained that he owed his success to having played professional football.

In 1977 Vic sold his corporation and accepted the position of Chief Executive Officer of a newly formed National Football League Alumni at a salary of $1.00 per year. His first step was to recruit a blue-ribbon advisory Board of Governors to raise money for kids, his greatest passion. His Board included Bob Hope, former President Gerald Ford, Congressman Jack Kemp, F. James McDonald of General Motors, Captain Gene Cernan, former Apollo Astronaut, and a Who’s Who list of others.

In 2001, a Proclamation was issued by the NFL Alumni…Excerpts include: “Whereas, in the history of the National Football League Alumni, Inc., Victor I Maitland occupies an honored place.” “Whereas, through numerous programs implemented with vision and energy, Victor I Maitland was instrumental in transforming the National Football League Alumni Inc. into a service organization (A 501c3 charitable and educational institution) that is nationally recognized and respected, that has helped promote the rich heritage of professional football that has assisted former players, particularly those in need, and more importantly, that, for the past quarter of a century has made a positive difference in the lives of countless children and their families nationwide.”

Vic is survived by his five adoring children, Jack Maitland, Bobbie Maitland, Kathy Lassen, Jim Maitland, and Sandi Bishop and spouses, 12 grandchildren,11 greatgrandchildren, his sister, Joan Wilson and spouse, his nephews, Rick and Rob Dunlop, his caring companion, Angela Gray, as well as multitudes of dear friends he made in his most recent home community of Bella Vista in Jupiter and through his beloved Jupiter First Church.

“Caring for Kids” was the theme and motto of the NFL Alumni that Vic used when he developed charity golf tournaments across the country that raised millions of dollars for youth charities. “For indeed,” reads the Prologue to the NFL Alumni’s Legends magazine, “what greater thrill could there be than to be told you played the game and led the life that showed some kid the way?”

Vic and Alumni leaders received the personal commendation of President Reagan, the proclamation of Youth of America Week as a national observance, and the blessing of Pope John Paul II. WOW!
With that in mind and In lieu of flowers, we ask that a donation be made in honor of Vic Maitland to JupiterFIRST Children's Ministry. Online gifts can be received at jupiterfirst.org/give, choose the "memorial gifts" option. Checks can be sent to the church's office at the following address; JupiterFIRST Church, 1475 Indian Creek Pkwy, Jupiter, Fl 33458.

We will love and miss you forever Dad …..Rest in Peace.

A Celebration of Life will be held at JupiterFIRST Church on Saturday, February 1st at 1:00 p.m. with a reception to follow.
Read Less

To send flowers in memory of Victor I. "Vic" Maitland, please visit our Heartfelt Sympathies Store.

We encourage you to share your most beloved memories of Victor here, so that the family and other loved ones can always see it. You can upload cherished photographs, or share your favorite stories, and can even comment on those shared by others. 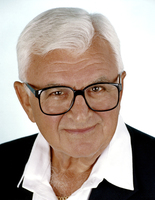