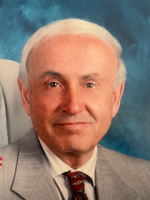 Dr. Pautler was born October 27, 1929, in Prague, Czechoslovakia. He graduated from Charles University, Prague, where he obtained his medical degree in 1953. After two years in the Czech military, and 10 years of research, Dr. Pautler received his PhD in 1963. Two years later he was visiting professor of Anesthesiology at the University of Pittsburgh. He and his young family then defected from Czechoslovakia in 1968, and from 1969 to 1979 he was an associate professor of Anesthesiology at the University of Pittsburgh’s Presbyterian Hospital. He then became director of the Anesthesia Department at St. Francis Hospital from 1979-1996.

Dr. Pautler was an avid reader and gardener who enjoyed jazz music and fine cuisine. Due to COVID concerns, a private family memorial will be held at a later date. The family would like to thank the staff at the Grand Residence of Upper St Clair and all of Dr. Pautler’s friends and neighbors from the USC senior citizens group for their care and support.