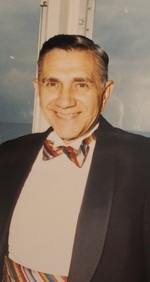 Age 97, of Bridgeville, PA on Monday, December 21, 2020. Beloved husband of the late Mary Ellen (Hamer, Daniels), devoted father of Jack, Buffalo, New York, step father of Mary Jo Cannon (Glen) and the late Michael Daniels (surviving Linda). Also survived by brothers in law, Richard Johns and Robert Hamer, and a host of relatives and friends who thought the world of him.
Nelson was born December 16, 1923 into a large, loving, tight knit family of Italian immigrants in Buffalo, New York. He is predeceased by his parents, Jack and Julia, and siblings, Frank, Sadie, and Ginger LoPinto. Nelson had a lifelong love of ballroom dancing to the great Big Bands, learning from his sister, Sadie, in the living room of their Buffalo home at age 15. Supported by his brother, Frank, Nelson earned a degree in Chemistry from Canisius College in 1945. He went on to have a career spanning over 40 years in the field of pharmaceuticals that took him from Buffalo to Cincinnati, Cleveland, and ultimately, Morgantown, West Virginia with Mylan Labs. While in Morgantown he attended ball room dances in the Pittsburgh area where he met the love of his live, the former Mary Ellen Daniels. Married in 1987, they danced and traveled over 30 years together, until her passing in December, 2018. Nelson and Mary Ellen formed the group “The Merri Makers” that performed song and dance routines at numerous area senior care homes. A highlight of his life occurred in 2008 when he and Mary Ellen went up onto the stage at Heinz Hall, dancing to music directed by Marvin Hamlisch. Besides his love and talent of ballroom dancing, Nelson was also an accomplished pianist. At the age of 82 he began a second, part time career, playing piano at senior care facilities in the south hills area. He continued to play, well into his 90s. Nelson had a great love of sports, including all Pittsburgh sports teams. He was always interested in soliciting opinions and expressing his own on current Pittsburgh sports issues. Nelson loved to organize and host large group outings from everything to Pittsburgh musicals and dances, to meals at local restaurants and his weekly Monday evening poker gathering.
Nelson was a man of many interests and hobbies and will be greatly missed. His legacy will remain with his extended group of family and friends forever.
Funeral arrangements by BEINHAUERS. Friends and Family are welcome at 2828 Washington Road, McMurray, 724-941-3211 on Wednesday, December 23, 2020 2-4PM. A Mass of Christian Burial will be celebrated on Thursday, December 24, 2020 10AM in Corpus Christi, Holy Child Parish. Entombment to follow in Queen of Heaven Cemetery. Please add or view tributes at www.beinhauer.com