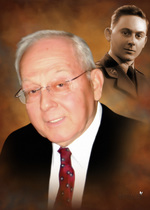 MCMURRAY, PA - John Harhigh, 88, died Tuesday evening, January 19, 2021 peacefully at home surrounded by his wife and daughter after a long battle with Muir-Torre Syndrome (MTS), a form of cancer.

Mr. Harhigh was born in Trenton, N.J. on June 1, 1932. He was the son of Nicholas Harhigh Sr. and Julia Remenicky Harhigh. He graduated from Trenton High School in 1950 as President of the German Club and Captain of the Track and Field team. After graduation, he enlisted April 26, 1951 in the U.S. Air Force.

Mr. Harhigh served nearly 5 years in the U.S. Air Force, with a final rank of Sergeant.

While serving, he was in the Allied Air Force Central Europe Program headquartered in Fontainebleau, France.

While stationed in France, he fell in love with Liliane Mary. They married on December 21, 1953, and had their daughter, Christine, in February 1955.

After military life, he and his wife moved their family back to New Jersey, where he worked at Public Service Gas & Electric Company as a service repair man, then a dispatcher and finally an accountant – he could find a way to fix or refurbish just about anything. He and Mrs. Harhigh later moved to Pittsburgh, PA to be closer to their daughter and grandchildren.

He owned and repaired well over 70 cars, many of them antiques.  Over his lifetime, he also owned around 100 clocks. He was a member of the Central Jersey Antique Car Club in Trenton, N.J., and later the VFW in McMurray, P.A.

Mr. Harhigh was a fluent speaker of French, German and Russian as well as his native tongue of English. He dabbled in Polish, Dutch and other Eastern European languages.

During his military service, Mr. Harhigh accomplished a years’ worth of college credit. While he never graduated, he stressed the importance of education for both his daughter and his grandchildren. He helped financially support all three through their education, and proudly celebrated degrees, awards and any form of academic accomplishment.

In his later years he enjoyed going to yard sales with his wife, savoring a good meal at Jackson’s Restaurant, watching his granddaughter’s live reports on the news and cheering on the Steelers and Penguins with his wife, daughter and grandson.

Mr. Harhigh loved his family. Most of all, he dedicated his life to his wife of 67 years, Liliane Mary Harhigh. He is survived by Mrs. Harhigh, their daughter Christine Harhigh Wunderlich, granddaughter Renée Wunderlich (husband Derek Duplack), grandson Clayton Wunderlich, and his granddogs, Dusty and Ulysses.

Visitation will be Wednesday, January 27 from 4 to 8 p.m. at Beinhauer Funeral Home in McMurray, P.A. A celebration of life service will be held Thursday, January 28 at 9:15 a.m. also at Beinhauer, followed by an Airforce veteran’s burial at the National Cemetery of the Alleghenies in Cecil Township, P.A. Face masks and social distancing are mandatory for all events.

Flowers may be ordered through the Beinhauer Funeral Home. Donations may also be made in Mr. Harhigh’s name to any U.S. Veterans association, including but not limited to: K9s for Wounded Warriors, Disabled American Vets, Gary Sinise Foundation, and Paralyzed Veterans of America.