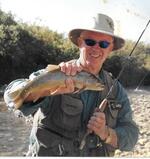 A GREAT CATCH: Joe Robert Irwin passed away on February 14, 2021, at Providence Point in Pittsburgh PA, two weeks after his 85th birthday. He received over 85 birthday cards. Affectionately known as “Big Ir”, “Big Joe”, “King of Recreation”, “Joe Air”, Dad, and PopPop, Joe is remembered for his dedication to and love for his family, his zest for life, and for following his passions. A loving husband, father, and friend, his devotion, generosity, and kindness touched all he met. He remained optimistic and willing to put in hard work until his final days.

Joe was born on Feb 2, 1936 to Drs. Malcolm Robert and Margaret House Irwin of Madison, WI. He graduated from the University of Wisconsin with a BS in 1958 and earned his MBA in 1963. During his undergraduate years he met and married Mary Lee Richardson of Cincinnati OH. They raised 4 children in the south hills of Pittsburgh, PA.

He served as a Lieutenant in the U.S. Navy from 1958-1961. Joe joined Pittsburgh National Bank in 1963 and retired after a 33-year career achieving the role of President of Pittsburgh National Bank and then, with the consolidation of PNC, Executive Vice President, Chief Investment Officer of PNC Bank Corporation. His civic contributions included the PA Economy League, Civic Light Opera, Treasurer of Girls Hope, Director of the Greater Pittsburgh Chamber of Commerce, Board of Directors Ruffed Grouse Society, Director of Blue Cross of Western PA, and active member of Westminster Presbyterian Church.

Joe lived his values, vigorously pursued his passions and always put family first. His many passions included fly-fishing, snow skiing, bird hunting, boating and water skiing, Westminster Church and all things involving his alma mater the Wisconsin Badgers. He earned a “W” as a member of 8 varsity rowing, culminating with the honor of Captain in 1958. He instilled to his family, a love and appreciation for nature and Colorado regardless of the season. He skied with unbridled enthusiasm, a sport his wife, Mary Lee, encouraged him and their 4 children to learn. They enjoyed a second home in Breckenridge, CO for over 30 years. During that time, he involved himself in the mountain community participating in the Summit County Foundation, Breckenridge Music Festival, Breckenridge Outdoor Education Center, and Colorado Community College. He fly-fished rivers all over the world, always catch and release, with a special fondness and appreciation for trout and the rivers and streams of Colorado.

A Celebration of Life will be held virtually at Westminster Church on Friday, February 19, 2021 at 11:00am. The service will be live streamed and available at the following link: https://youtu.be/8u9wuZy4IlM

Arrangements by BEINHAUERS. 724 941-3211. Please view or add tributes at www.beinhauer.com