To share your memory on the wall of Jerome Barney, sign in using one of the following options:

The gesture that can change the world

We encourage you to share your most beloved memories of Jerome here, so that the family and other loved ones can always see it. You can upload cherished photographs, or share your favorite stories, and can even comment on those shared by others.

Posted Nov 19, 2019 at 03:11pm
My deepest sympathy to the entire Barney family. I have known Jerry for many years through real estate transactions. He was always very professional and so nice to work with. He was a true professional. Time has a way of easing our pain when we lose a loved one, but we never forget our loved ones. Will keep you all in my prayers. Mary Jane Greenlee Sertik
Comment Share
Share via:
HS

Medium Dish Garden was purchased for the family of Jerome Barney.

Posted Nov 18, 2019 at 08:55pm
Sorry to hear of your and your family's loss. I remember enjoying meeting Jerry in the 1980's right before he and Jenny married.
Dee Dzura
Comment Share
Share via:
HS

Flowers were purchased and a memorial tree planted for the family of Jerome Barney.

Dianne and Jeff Watson purchased flowers for the family of Jerome Barney. 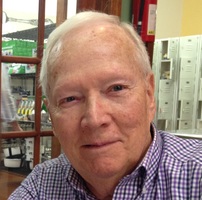