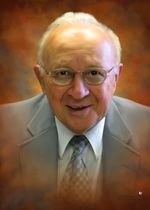 Age 96, of Bethel Park, born in the Friuli region in the northeastern Italian Alps in the village of Pesariis, passed away surrounded by family on Friday, January 22, 2021. Ody was the beloved husband of 71 years to the late Frances R. (Marino) Mackin; loving dad of Dean (Cynthia) Mackin and Marcy (Jerry Schwertz) Mackin; proud grandfather of Melody (George) Johnson, Stacy Mackin, and Zachary (Julia) Olawski; adoring Pop Pop of Charles Italo Johnson and Jade Palmer Olawski. He was preceded in death by his parents Italo and Ida (Petris) Machin. Ody immigrated to the United States as a tot with his family through Ellis Island and resided in Pennsylvania for all but five years of his life. Almost three of those years were service in the U.S. Army during World War II, 27 months of which were served in the Pacific Theater of Operations. Upon his discharge, Ody took advantage of the G.I. Bill to attend the Carnegie Institute of Technology, now Carnegie Mellon University, where he received his Bachelor of Science in Civil Engineering.

Ody became a Registered Professional Engineer in 1953, having reached that distinction when he worked for Richardson Gordon Associates (RGA) in its Pittsburgh office. He served in various capacities in his 10-year tenure with RGA, where he worked in both the bridge and highway departments. Ody served as project engineer on the Point Park Portal Bridge (the only one of its kind in the United States) and the Delaware River Turnpike Bridge, which connects Pennsylvania and New Jersey. He also gained experience on both the Ohio and Indiana Turnpikes as well as with the Pennsylvania Department of Highways (PDH), now the Pennsylvania Department of Transportation (PennDOT).

It was because of this wealth of experience, enhanced by his field surveying exposure, that Ody decided, together with a colleague (George Davic), to form a partnership to provide bridge, highway, and surveying services, a partnership that lasted three years. The partnership was dissolved in 1963, and Ody decided to provide those services as Mackin Engineering Company, a highly respected firm in business to this day.

Over the years, Ody was a very active member of the Pennsylvania engineering community. He was an original member of the Council of Engineering Cos. of PA, which later became the American Council of Engineering Cos/PA. Ody served as President of that organization in 1980-81, and in 1999, was awarded its Distinguished Award of Merit. He also received the Lifetime Achievement Award from the Airport Corridor Transportation Association (ACTA) in 2012 and the Distinguished Service Award from the Pennsylvania Society of Professional Engineers (PSPE), Pittsburgh Chapter, in 2014.

In 2015, due to his six decades of service to the industry, the American Society of Civil Engineers established the Pittsburgh Section Student Award Foundation Italo V. (Ody) Mackin Achievement Award. This award will be given annually in perpetuity to meritorious students graduating from Pittsburgh area engineering universities. In lieu of flowers, the family suggests contributions to the Foundation, attn. Mr. Terry Downs, V.P., Gannett Fleming, Foster Plaza 8, Suite 400, 730 Holiday Drive, Pittsburgh, PA 15220