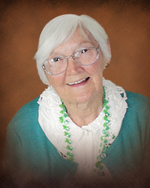 Elizabeth Jane Cornwall, gave her last sweet embrace, on February 13, 2021, finally letting go of a life that she had filled to the brim. Elizabeth, AKA “Betty Jane” or “Gam/Gammie” to her multitude of grandchildren and great grandchildren, was born on March 18, 1921 in Pittsburgh, PA. She was a child of the Roaring Twenties and grew up in the Great Depression, there is no doubt these contrasting times shaped the remarkable human being she was. Betty loved to dance and sing, the radio at her house was constantly playing. Dancing is how she met the love her of life. A friend had rented a jukebox and invited a bunch of folks to come over and dance. Something about Glen Miller, the Lindy Hop and the handsome face of John Cornwall was enough to grab her attention and hold it for the next 60 years. John and Betty married, shortly after she became pregnant with her first child. As exciting the news was of their pregnancy, a different type of excitement was brewing in their marriage. John was being called away to help fight against the Luftwaffe in the air. Betty persevered, she wasn’t ever one to complain, she held the role of single parent with her head held high and admired her husband for his bravery. There was only once where she told of her emotions getting the best of her. It was when a telegram was sent to her sister’s house, she thought for sure it was going to bring news of John’s death, like so many other telegrams had delivered during the war. Thankfully, for the rest of her seven children that were to follow, that was not the case. The telegram explained that John was having horrible fits of asthma and that he was being sent back to the states to receive medical help. Betty could rest easy that day, John was no longer in combat, at least for a little while. Miraculously enough, after 10 successful missions on the B-24, John returned home safely to Betty and his daughter.

John and Betty went on to have a total of eight children. Their house was a chaotic place filled with life, love and a lot of banter. With five boys and three girls, high energy and quick wit was a necessity. Make no mistake, Betty ruled the roost. This atmosphere of chaos, an open door policy so to say, never left, even as all eight kids began to fly the coop. People never stopped coming to see and spend time with Betty Jane. An envious neighbor in the townhouse complex she lived in once commented the amount of visitors Gam received to that of a “meth house”. Everyone understood the jealousy, no one else in that complex got a fraction of the visits Gam did. The only day her family didn’t look forward to with her was “hair day” which happened about once a month. It would always get someone who popped in to see her and the frustrating realization that she was going to be gone all day was the last news anyone wanted to hear. Even John, her husband, would vehemently protest hair day. When one of his kids told him this was somewhat selfish and that she needed this well-deserved break, his response was “I just miss your mother”. Which was exactly what we all felt when she wasn’t around.

The world was blessed to have Betty for 99 years. 99 years of good health and a steel trap mind. Gam defied her long years in every regard. Not once did she ever look or act her age, her vitality was so staggering that she was often referred to as a “living miracle”. Gam had the best quirks, she loved a late night milkshake, didn’t matter if it was 10PM or 2AM, if she wanted a milkshake she’d have one. She drank cups of tea all throughout the day, played cards, did the New York Times crossword word puzzle religiously, and always checked the cartoon section for her favorite, “Zits”. If it really made her laugh, that paper would be cut up in a few seconds and hung right on the fridge for the rest of us to enjoy. She had the greenest thumb, give her any plant, and it would thrive. Even the avocado tree, which was on the verge of 10 feet tall, was blossoming in the height of Pittsburgh’s dreary winter. To combat the dullness of a routine, Betty, throughout most of her 90’s would take spontaneous road trips all over PA. She never tired of seeing the falls at Ohio Pyle. She thoroughly enjoyed a good picnic table as long as it was accompanied by a view, can of coke, sandwich, and of course a sweet treat. If she was out to dinner one could bet that any piece of bread left no matter how small would be wrapped up and taken, along with those teeny tiny jams she stuffed in her purse or pawned off on one of her kids or grandkids to take. She was an avid reader, books were to be found in every corner of her room. She was the most faithful pen pal, sending letters every week in her beautifully distinct cursive. She loved the Lord and prayed every morning and every night. One would be hard pressed to find a person who could recall a time that Gam said something bad about another. Beyond all, Gam valued time spent with her children, grandchildren and great grandchildren. Family was everything to her. Gam always chose love, she once wrote, “Choose to be happy, live enthusiastically” and those words are exactly what she followed her entire life. Which was quite a feat considering the trade for her extraordinary long life was having to watch all of those she loved dearly pass on, especially her husband John and her eldest son, John “Jack” Cornwall. Despite these immensely tragic losses, she never turned bitter, her benevolence permeated throughout all those in her life. She was the light in the darkness, and she continuously led her family to be better.

Toward the last week of her life, she told to the family to, “trust the end”. Even there, bedridden and fighting like hell for every breath, her main focus remained the same as it always was. To comfort and take care of those she loved. Betty was tough as nails, yet gentle as a lamb. She radiated kindness. She loved with every fiber of her being and her love will continue to resonate in the hearts she left behind, especially those of her children, James (Kathleen) Cornwall, Timothy (Judith) Cornwall, Mark Cornwall, Brian Cornwall, Jayne (Frank) Lachendro, Elizabeth (Ed Chismar) Gallagher and Amy (James) Sadowski, along with a host of grandchildren and great grandchildren.