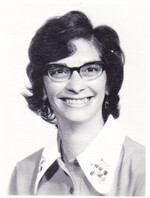 Annette (Pasco) Kleber, 85, passed away on Tuesday, January 26, 2021, after losing her battle with both Alzheimer’s and cancer at Sunrise Senior Living of Upper St. Clair. She was born October 4, 1935 in West Aliquippa, daughter of the late Charles and Lucy (Angelilli) Pasco.

In addition to her parents, she was preceded in death by her beloved husband of 52 years Ernest J. Kleber and brother-in-law Jerry Kleber.

Annette graduated from Aliquippa High School in 1953, where she played clarinet in the band. She worked at Friendly Credit Union where she came to know many customers with her easy smile and laugh. She developed a financial acumen that served her family well.

Annette loved to dance, learning to toe and tap dance as a young child with her sister and later ballroom dancing with Ernie. She enjoyed watching dance performances and musicals on stage and screen. Her delight in watching gymnastics and figure skating was infectious. Train rides thrilled her. Riding the train to Pittsburgh for a rare shopping trip was one of her fondest childhood memories. She was an avid reader. Insisting on only happy endings, she often read a novel’s end before deciding to read it at all, much to the amusement of her family. December brings memories of her delicious homemade Christmas cookies and nut roll, which never lasted long no matter how much she made.

A Private Interment will follow at Mt. Olivet Cemetery in Aliquippa.

The family extends our sincere thanks to the staff of Sunrise and to Bobby, Heather, Sarah, and Reverend Jim with Gateway Hospice and special gratitude to Annette’s cousin Charlotte DiNardo and late husband Charles, and their daughter Christine for looking after her in her time of need.

The family suggests that memorial contributions be made to a charity of your choice.

Online condolences and tributes may be offered by visiting www.beinhauer.com